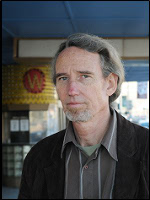 Todd Darling has been chosen by the Trojan Core Team to direct a film of the climactic last rites of passage of the Trojan Horse. He received his BA from UC Berkeley, and his MFA in Motion Pictures and Television from UCLA. Darling’s producing and directing credits include: “Año Nuevo,” which won the Academy of Television Arts and Sciences Eric Sevareid Award; “Saviors of the Forest” (exec. producer), a feature documentary which screened at Sundance; “Farm Club” (director) for USA; and “Laguna Beach: The Real OC” (director) for MTV. Details about his vision for the film can be found here.

In addition to Darling’s work on the Grand March and Procession, the project will videotape the interactivities of the hundreds of Burners costumed as various Greek deities and mortals. Videographers will be needed Monday through Thursday on the Playa to cover events such as the re-enactment of a battle between Greek and Trojan soldiers, recreations of the story of Troy, and the children’s story hour.

The Trojan Team also hopes to continue recording its work between now and Burning Man. Videographers are needed for events such as the June 4 Recruiting Party at Golden Gate Park and SF’s Precompression and Seattle’s Solstice Parade on June 18. Volunteers should reply to the casting call.