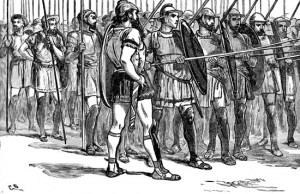 Burners volunteering to be costumed Greek or Trojan soldiers will be able to participate in different ways and times on the playa. Regardless of whether you have martial arts experience or not, we have a place for you in the Thursday afternoon battle reenactment. Training and performance will be supervised by Jonathan Visser, who has studied many forms of martial arts for many years and is certified by the Society of American Fight Directors in Hand-to-Hand, Rapier and Dagger, Broadsword, and Quarterstaff.

Soldiers will also march in the Grand Procession when the Horse is transported to its final destination and burned. Other duties available during the week include guarding the Horse, providing security at night when the bar is open, interacting with visitors, and spreading the word about the reenactment and the procession.

Soldiers must create their own costumes. Look for tips about appropriate garb on the Costuming page. Soon we will add more information on how to make helmets, weapons, and shields. We will also do a workshop on the playa and provide materials for weaponless soldiers to arm and protect themselves. 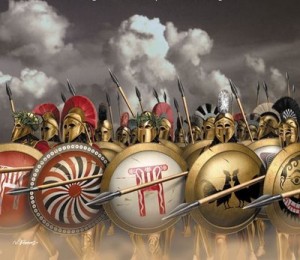 I firmly believe that repetition of a few moves is a better teacher than length of study for the kind of combat that is part of the Trojan Horse Project. Besides, who wants to spend long hours  practicing when there is fun to be had on playa?!  (Except me and other fanatical weapons and combat geeks.) We’ll have one training to learn four simple combos and safety rules on Wednesday and one dress rehearsal Thursday to prepare for a dramatic, 20-minute, combat reenactment later that day.

Choreography for this massive production will be simple to learn, but to the audience, it will look amazing, an effect achieved by our combining randomness with familiarity. Everyone who participates in the battle will learn four simple combat patterns, which can be cued visually. With so many fighters it will look complex, but is actually very simple.

I ask that those who wish to be part of the reenactment commit to four hours of drilling, rehearsing, and getting all our ducks in a row to look dangerous yet be safe. In return, you learn or practice your sword fighting and become part of one of the most exciting projects on the playa as you kill your fellow Burners and perhaps die yourself in an epic faux battle of the ages. After we march to the burn site Friday, you will secure and guard the perimeter, so you get ringside seats to see the Trojan Horse burn. I look forward to working with you all.