The Tale of the Trojan War

Eris, goddess of Discord, was not invited to the wedding of Thetis the Nereid and mortal Peleus. She showed up anyway and denied entry, she tossed amongst the gathered deities a golden apple inscribed with the word “Kalliste” (“To the Fairest”). Hera, Queen of the gods; Athena, goddess of battle and wisdom; and Aphrodite, goddess of sexual love; quarreled over who should get the apple. Zeus gave Paris, a Trojan prince and the most beautiful man alive, the burden of choosing which goddess would receive the golden apple. Hera offered him dominion over the whole earth, Athena offered him bravery and victory in all battles, Aphrodite offered him the most beautiful woman in the world, Helen of Sparta. Paris, a pampered princeling captivated by the divine eroticism of Aphrodite, bestowed the apple upon her. Hera and Athena vowed to avenge the slight and destroy Paris and the Trojan people. 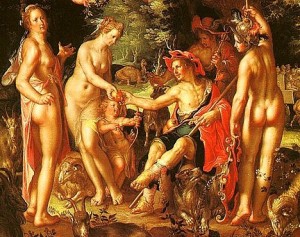 The Trojan War started with an apple and the "Judgment of Paris" and ended with the destruction of Troy after a 10-year siege.

Shortly after, Paris travels to Greece and first lays eyes and then a lot more on Helen of Sparta, wife to King Menelaus. With Aphrodite’s help, Paris seduces her and the two escape to the far-distant city of Troy, where his father Priam reigned. Besides dangerously offending Menelaus and his powerful brother Agamemnon, Paris had angered the two most powerful goddesses in the pantheon. Eris had sown her discord! The kings of Greece were called together to honor an old oath to Menelaus, and the thousand hollow-bellied ships amassed at Aulis set sail to war. These great kings included Achilles, the most feared warrior in the world, and Odysseus, the clever and much-traveled king of Ithaca.

Agamemnon had to sacrifice his youngest daughter, Iphegenia, in order for the winds to become favorable for sailing east. This would prove to be his undoing, as he was killed by his wicked wife upon his triumphant return to Mycenae 10 years later. Meanwhile, Iphengenia’s blood was sufficient to allow the fleet to reach Troy. There, they embarked on a 10-year siege of the mighty city. In the siege’s ninth year, Achilles and Agamemnon got into a fight over the spoils of war (a Spartan lady named Briseis, to be precise), and the world’s greatest warrior refused to fight until his concubine was returned to him. Without Achilles and his troops, the Greeks were disheartened and the Trojans gained ground, unleashing their greatest fighter, Hector, oldest son of King Priam and brother to the lazy Paris. 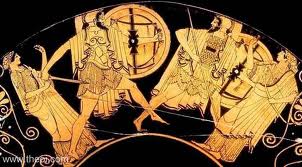 Even the gods contended against each other in the Trojan War. Here Paris and Menelaus duel with Aphrodite and Artemis backing their favored mortals.

Achilles eventually kills Hector, but the Greeks still could not breach the high walls of the city. Seeking an end to such long suffering (though for him it’s just the beginning), Odysseus had a giant, hollow horse built, and 30 of the best Greek fighters concealed themselves within it. He then ordered the thousand Greek to ships sail away and hide behind a nearby island, making it appear that they had fled home. The Trojans saw the ships depart and believed they had finally triumphed. They debated whether or not to take the Horse within the city walls. The prophet Laocoon tried to dissuade them but was brutally murdered by sea serpents sent by Athena. Cassandra, the Trojan princess cursed by Apollo, also warned the Trojans that accepting the horse would bring their downfall, but, as always, no one believe her. They wheeled the beast into the city and celebrated what they mistakenly thought was their victory. Late that night, after the party had died down, the Greeks crept out of the horse’s cavernous belly, unlocked the gates, and let in the Greek forces, which had returned under cover of darkness. The rest of the story is blood and slaughter and fire in the night. Even the gods fought one another. Paris killed Achilles and was then killed by Menelaus. Aphrodite’s son, Aeneas, was one of the few to escape and went on to establish the people who would later be called the Romans. Odysseus stands as the hero of this war that ended the Age of Heroes. It was he who realized that when physical strength cannot break down the walls, the mind must find its way to make the gates open. 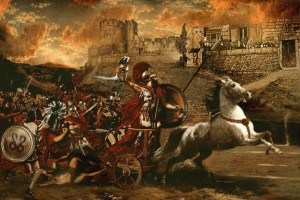 While Achilles triumphed over his arch rival Hector, he was shot in the heel by the cowardly Paris, and died from the poisoned arrow.