About Our Trojan Horse Shortly before it's second Procession. Screenshot of video footage by Gary Wilson, MindfulLight.com

Project Recap: And the Horse Came Forth

Building and installing the Trojan Horse, the Grand Procession, and burning the beast fulfilled virtually every one of our goals and dreams…and still managed to be full of surprises.

The piece was monumental. Despite several of us having worked on the project for well over a year, even the core project team members were awed by the terrible beauty and sheer size of the horse and cart. Standing 50 feet high, weighing 30 tons (with each wheel 2,500 pounds), it dominated the playa and served as a landmark to guide Burners, especially at night. We knew all the dimensions beforehand, but until we actually stood next to the horse, we didn’t really comprehend how big she was.

For many folks, the fact that the horse actually made it to Black Rock City was the most unexpected turn of events. We raised $120K in three months; built the horse, cart, and Gates of Troy in six weeks; erected Troy Camp — all six stories plus six A-frames and three towers — in five days; and installed one of the playa’s most memorable works of art. And this was our first Burning Man project!

Our biggest surprise on the playa (especially to the member of the pyro team working in the head of the horse) was the premature bolting of the beast. The “slaves” recruited to pull the horse revolted and took off earlier and far faster than we anticipated. While we were at first dismayed by this development, it delights us now and is in keeping with Burning Man’s spirit of anarchy. How fortunate that no one was injured or worse as the horse reached speeds estimated at eight mph.

Once Douglas Bevans managed to head off and stop the runaways, the DPW worker who was spreading decomposed granite at the burn site finished the job. Remnants of the brass and percussion corps reassembled to play a truncated portion of the processional composed for the event by Douglas. We reorganized the former slaves, and they completed the horse’s passage through the Gates of Troy to much jubilation and relief.

The ignition and cremation of the horse was breathtaking. Artemis, goddess of archery, fired the first flaming arrow, which was followed by volleys from 20 other archers. The horse bled dripping flames and reacted with snorts of sparks, a fiery mane, and concentrated salvos of fireworks that turned the skies red. Stoked by fuel within, the flames rose high, and the panels forming the cubistic exterior quickly disappeared to reveal a spare, elegant skeleton. Pieces of lumber fell until only the neck and head, floor, and legs remained. Finally, the center could not hold, the front legs collapsed, the horse bowed her head then lay her heart upon the ground gracefully and as if in slow motion. It was quite a rite of passage for the horse and all who worked on her.

A giant, 28-ton horse stands, dark and menacing, its head nearly 50′ above the playa. During the day, it casts an ominous shadow and is the scene of much imaginative interactivity as costumed members of Troy Camp and volunteers from all over the world play Greek gods and goddesses and characters from the Trojan War. At night, the horse glows malevolently from its core and a surrealistic room opens in its belly that will stimulate and challenge the five senses. Created by artists, architects, engineers, and others from around the world, this magnificent structure is designed to reflect Burning Man’s 2011 theme, Rites of Passage

The Trojan Horse will undergo its own rites (and rights) of passage Friday night. Accompanied by an immense brass and drum corps, the masses will pull the beast from the Esplanade through the Gates of Troy and into the Temple of Dionysius. There it will be consumed by a spectacular conflagration. The sheer size, artistic power, innovative technology, and theatrical elements of this installation will make it a memorable part of Burning Man 2011. 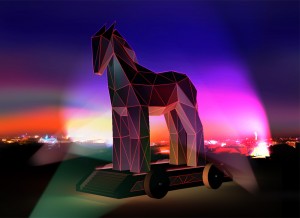 Learn more about the the philosophy behind our endeavor, read up on the original myth, and see how we tie the horse into Interactivity on the Playa.

The horse isn’t remarkable just for its stature, Design and Illumination, there is also a lot happening Inside the Horse, so dive into the Belly of the Beast and the Hidden Oracle Room.