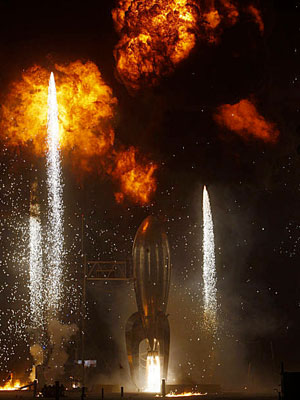 Black Rock FX signed on this week as the Horse’s Pyrotechnics Team with “Pyro Jack” Schroll as lead. The work of BRFX is the stuff of legend and includes pyro for the Angel of the Apocalypse and Mutopia by the Flaming Lotus Girls, Rock Opera, Megalopolis, Raygun Gothic Rocket, and Crude Awakening. The team has almost 20 members (six at the core), including the “Best Family in Pyro“ — Dad Dave Best (no relation to Temple builder David Best), daughter Britney, and son Carson.

A fixture at Burning Man, Schroll has been an inspector with the Fire Art Safety Team (FAST) since 2003, overseeing anything that burns on the playa. His fascination with fire and explosions began in Kansas City, where he grew up and there were no restrictions on age or explosive charge for buying fireworks.

“The BRFX Team,” Schroll says, “just seems to have pyro in their blood. Once you’ve smelled the smoke, it doesn’t let you go. Most of the team do pyro as a hobby, but several are lucky enough to do it all year long.”

Schroll lives in Walnut Creek, CA with his wife of 34 years, Tanya. A serious car guy, he runs a top auto repair shop, Mostly Mustangs, in West Oakland and for years owned the first GT350 off the production line. He’s been burning since 1996.