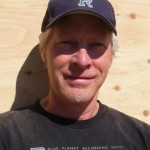 Reno crew chief Bill Tubman was pleased to be able to rent a 40 x 60 warehouse space a few hundred yards from the Truckee River and a short bicycle ride from his home. He said the toughest thing about the project was just getting started—finding work space, securing the money to begin work, and getting his crew. “We’re all heads-down kind of guys and have already put in more than a couple of 12-hour days. The cart is absolutely huge. You don’t have any idea what an eight-foot-high wheel really looks like until you’re standing next to it and looking up at it.”

When the crew put the first wheel they built on a trailer and hauled it down to Reno’s Compression event, Bill said, “People simply couldn’t believe their eyes. They kept on asking, ‘How big is the horse going to be.’” One of the four Trojan wheels at Reno’s Compression event 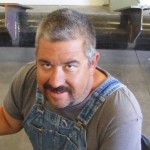 Lee “Snow” Williams, a Senior Builder and Heavy Metal Specialist for the project, is building the axles for the project. He says, “I’ve built many strange vehicles from paintball tanks to art cars, but this is by far the largest moving object I’ve ever worked on! Even the smallest pieces of the axles have to be moved with a forklift. I can’t stress enough how HUGE these are. It’s simply amazing to work on such a big wheel set.” Lee and one of the cart's axles

The Reno crew has their own Facebook page “The Cart Before the Horse.” Check out the amazing pictures there. In addition to the cart, the Reno crew will also build twin obelisks that will serve as the Gates of Troy.