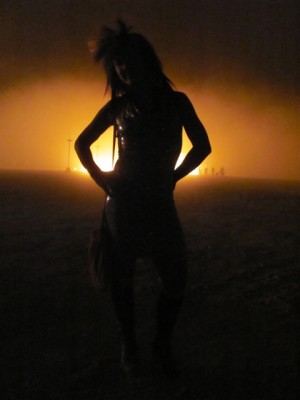 Melissa Ryan has been like “My Little Pony” to the Trojan Horse. Until the Horse was packed up for the playa, she would gallop to NIMBY after a hard day’s work, eager to play with the boyz and their power toys. She grew up in Rhode Island, a state roughy equal in size to BRC. Despite coming from the smallest state in the Union and being all of five feet tall, Melissa measures up to monumental tasks and excels at pushing herself to great heights.

She earned her BSW in Boston and MSW at New York University and has been fiercely committed to her career in social work, assisting abused children and families with special needs. It’s not easy work. She’s had to physically restrain children much bigger than she. She’s worked in a psychiatric hospital in New York City and was a therapist then Clinical Director for a teen group home. For the past 12 years, she’s been an Adoptions Social Worker for Alameda County, California..

Melissa moved to San Francisco in 1991 and has thrived on the West Side. She loves being able to camp year round, walk along beaches, ski superior slopes, attend free concerts in Golden Gate Park, enjoy the cultural diversity of the Bay Area, and all of the opportunities to do new and exciting things it offers, such as the Trojan Horse. At NIMBY, she’d eagerly climb any triangle and dangle at every ledge with a power tool slung on her shoulder and a gleeful smile on her face.  What she lacked in knowledge and skill she made up with a willingness to learn and desire to work harder than three men. An unexpected joy for Melissa was the camaraderie, the incredible bonding experience she felt while building the Horse. A devoted pyro, she can’t wait to see the beast she helped to build burn.

Posted on August 20, 2011 by trojan in Updates and tagged construction, Melissa Ryan, portrait.