We are very proud to announce that Joel Dean Stockdill – also known as Rocket Joel – has joined our team as Master Builder! We want you to meet the man, and some of his previous Burning Man pieces: 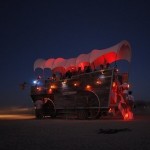 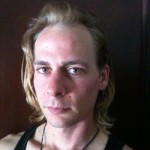 Joel Dean Stockdill grew up in the farming town of Garrison, North Dakota. He gained his love of woodcraft at his father’s knee, helping his dad refinish homes and furniture. Joel spent his early 20′s learning carpentry in the mountains of Colorado, starting with tract homes to meet the demands of oil and gas workers on the Western Slope. He graduated to the immense and upscale “cabins” and stately ski chalets of the Aspen region. Before he attended Burning Man in 2007, he visited San Francisco, both for the first time. The LARGE-scale art he saw in those venues was his prime motivation for moving to the Bay Area. Since then he has immersed himself in the SF artist community, pushing boundaries and proportions as demonstrated by the size of his most recent work. At Burning Man, he has had a principal role in the Covered Wagon (2008) and Ghost Ship’s Pirate Ship (2009) and Battleship (2010). His involvement in the Trojan Horse Project is a perfect fit for the exponential growth in his sculptural work. The challenges it presents bring a wide smile to his face.

Posted on March 23, 2011 by trojan in Updates and tagged construction, Joel, team.