Dan Fox, a Man of Many Parts 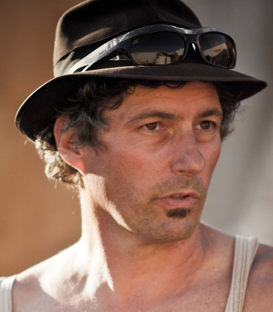 Dan Fox, our nimble-witted, generous, dark-humoured, handsome hero in Oakland, is the Trojan Horse’s Construction Coordinator. He was raised in California’s Central Valley and is a 25-year Oakland resident. Dan has been a journeyman carpenter, a professional musician and songwriter, a computer programmer, an acrylic on canvas impressionist artist, and a land acquisition underwriter/analyst for two Fortune 500 developers and a British-American conglomerate. He holds a BA in Environmental Studies, has presented to the Association of American Geographers, and conducts an annual seminar on infill development in the Bay Area. He spends his free time landscaping his property in Bodega Bay and researching/studying exoplanet discoveries, creating Google KML scripts to render his findings. Dan enjoys traveling whenever possible, especially to visit his family in Catalunia, Spain. He has a par ticular fondness for Spanish/Arabic-influenced music and a beautiful lyric tenor voice but prefers singing in the manner of Captain Beefheart and Tom Waits. This will be his fifth trip back home to the playa.

Thanks Dan. We hope you know how much we all love you!!

2 Responses to Dan Fox, a Man of Many Parts