Bevans with legendary Canadian band the smalls circa 1998

A native of Edmonton, Canada, Douglas Bevans is a multi-disciplined artist experienced in 3-D graphic design and a songwriter with 20 years of creating and producing music.

The eight-time Burner enjoyed a successful career as a founding member of a popular rock band, “the smalls,” which toured extensively throughout the world.

Since it disbanded in 2001, Bevans has explored new genres of music independently and through innovative collaborations. In his last one, he produced and provided music for an avant garde album showcasing the surreal poetry of an autistic artist known as Hobbins. 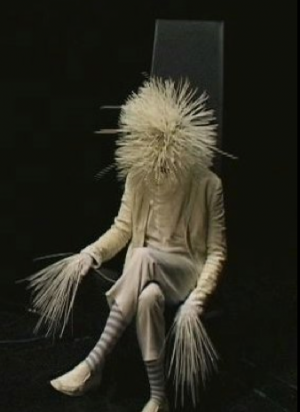 Douglas Bevans as, "Quillface / Enough is too much! " A character he created for last years Burn.

In his current music, he’s working with abstract electronica and found sound.

Last year, Bevans was awarded a coveted composition residency at the Banff Centre. While there, he wrote a song that inspired the vision of a mythical horse on the playa. The Trojan Horse project will be his highest artistic achievement as a designer and as a composer.

Read about the smalls.