Head Shaving for the Horse! 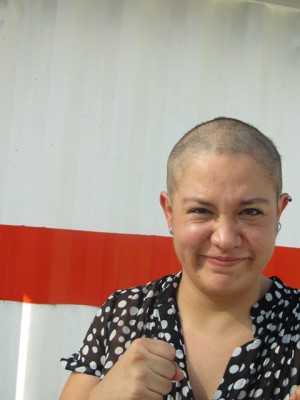 Alma - with her new lightweight head, about to lift off the ground

Meet Alma/Yabbasha who in August will help us erect the beast on the playa.

She’s a nomadic Mexican, a qualified architect, who has a passion for photography, drawing, literature, graphics novels and cinema. Besides her architecture degrees she is still struggling with a MSc. in art and technology. After Mexico, Argentina, the French Riviera, Sweden, Macau and Hong Kong, she’s now positioned in Singapore, where she works on big construction projects and explores all islands in south-east Asia.

To help us reach our Kickstarter goal, Alma went ahead and announced she’d shave her head if her co-workers would donate $500 for the horse! 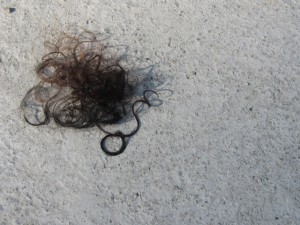 Here’s her account of how it went from a lighthearted dare one evening to a rather serious shaving session the next morning:

My attempts at raising funds had so far fallen on deaf ears. Maybe it was the lack of starving children or heartwarming stories, but my increasingly panicked emails had so far garnered no response. When trying to explain my predicament to the English gentleman sitting next to me, the typical obstacle to parting with money arose, that of building something and then burning it down.

Noting the lack of progress during the explanation/argument as to why this is important to me, I muttered something along the lines of “if you give me one hundred US dollars I will shave my head”, which quickly turned into “I will shave my head for five hundred US dollars” if the funds could be raised by the end of the working day. An email to all and sundry was fired off into the ether, and a chain of events was set in motion.

The first reply came in less than 15 minutes later, with Fiona pledging a $100. I expected a few more emails to trickle in, but the actual head shaving to be more an act of goodwill than an actual expectation of $500. 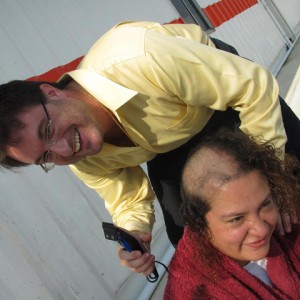 Alma and her major donor/executor Phil

So you can imagine my surprise upon walking into the office, where there was awaiting me not only Phil, with $500 in hand, clippers and towel, but another colleague there to document the event. I wasn’t quite prepared for it all, I had mentally prepared for the end of the day, presumably after a drink. Phil was shaving my head before I’d even had time for a coffee. A number of construction site workers quickly gathered around to see what the fuss was, and began to take photos. I collected cash from them afterwards, but none of them had a clue what it was they were contributing towards. 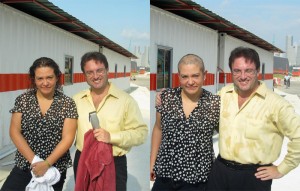 The before and after shot

So despite all my previous protestations via email, pictures circulating of my newly shaven head gathered much more of a response. As one friend said: “I still don’t get why you want to build something to burn it down, but you get money for the entertainment value of your bald head”. 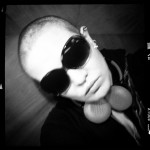 Despite it all, I still have to explain repeatedly why, and most likely will just place a model of the horse with a jar for change on my desk; but from my shaving enterprise I calculate I have raised a little over $1000 USD. So people now come to my desk, ask if they can pat my head and give me cash as if touching it for good luck.

My deepest, warmest thanks to Phil and Fiona who started the ball rolling, Lauren who took it upon herself to collect funds for this from the other office; and to everyone else who helped!

Posted on June 28, 2011 by trojan in Updates and tagged Alma, fundraising, hair, portrait.

One Response to Head Shaving for the Horse!