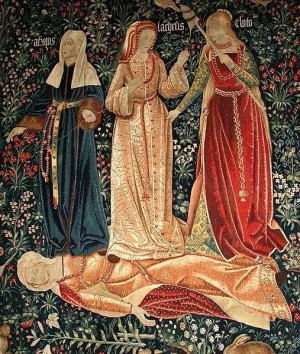 Among our many performers supporting the project by incorporating mythological characters we’ll hvae three lovely ladies taking on the roles of The Three Fates:

The Greeks of the high classical age put strong faith in the idea of fate and of an unavoidable course of life. They thought every life had a reason for beginning, and that reason was also its end. (Fate is distinguished from Destiny, which has more of an undertone of control.) This divinely indifferent culmination of the course of life is what the three Fates represent. Their name in ancient Greek is Moira, which means “a portion,” so the three Moirae represent the personification of the share of existence that is meted out to all living things. The Moirae are ever-present in the Trojan story.

In classical mythology, the Moirae are generally shown as three sisters busy at their business of spinning. Clotho the Spinner spins the thread of a person’s life; her symbol is the distaff and spindle. Lachesis the Alotter decides the length of the thread of one’s life; her symbol is a measuring rod. Atropos the Inevitable cuts the thread when it is time to die; her symbol is the pair of “abhorred shears.” The Olympian gods hold no sway over them, nor do the Fates discriminate between the death of a mortal and the death of a god. They predate the Olympian gods by at least three generations and are thought to be the parthenogenic offspring of Nyx, primal force of night’s darkness. (Other stories about their birth exist, but this one is the most prevalent and also sufficiently awesome.) The Fates are sometimes said to be the half-sisters of the Horae, who are the goddesses of the Correct Moment, or “Timing.” 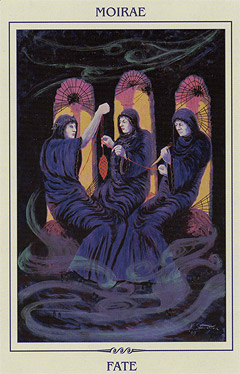 The Moirae are not vindictive or evil, nor are they benevolent. They are indifferent. Appearing at the family hearth three days after the birth of a child, the Moirae, specifically Clotho, begin spinning the thread of the person’s life to the length allotted by Lachesis. When the time comes, Atropos will snip the thread.

While they are sometimes portrayed as young women, generally the Fates appear as three ancient hags, indicative of the fearful realm they personify. Occasionally, they are shown as milky-eyed and blind. Wrinkled old crones and blind, unfeeling spinsters have counterparts in other ancient traditions as well. The Norns of the Norse and the Baltic Laima are spinning sisters who control or embody fate.